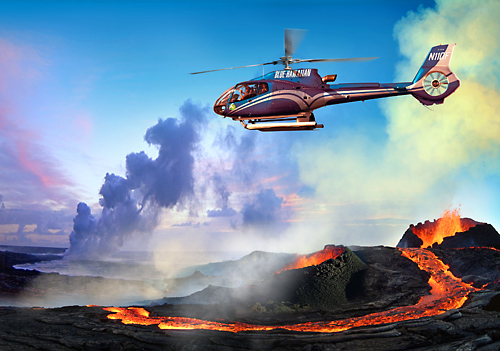 Hawaii volcano! Did you know that Hawaii was born out of volcanoes. Interesting fact, right? Hawaii has two, equally grand national parks for volcanoes: Haleakala National Park and Hawaii Volcanoes National Park. Either is well worth a visit, but everyone should try to sample both.

Haleakala is located on Maui and covers 118 km² (45.5 mi²).Originally part of Hawaii National Park, it was established as a separate park in 1961. Since then, millions of visitors have looked in awe upon its natural beauty.

The park has two sections: the Summit and Kipahulu, each with its own distinctive character.

The dormant Haleakala volcano is located in the Summit Area and features a crater that measures 3 km/2 mi wide by 11 km/6.7 mi across and roughly 800 m /2,600 ft deep. Looking down, visitors can easily make out huge cinder cones characteristic of idle volcanoes. The crater is reached either from the Halemau’u Trail or the Sliding Sands Trail. There are even cabin accommodations for the truly adventurous.

Like many spectacular volcanoes, the area is dotted with a large number of evergreen and other tree species. Everything from Pacific Pine, Spruce and Fir to Sugi from Japan and Deodar from the Himalayas make a home on the mountain.

The Kipahulu section offers pools fed by the Palikea Stream and the many falls on the mountain. They provide views of native freshwater fish species that make their home in the rain-fed crater. Swimming among them is a favorite activity of visitors.

Even if you don’t swim, be prepared to get wet, though. Kipahulu gets an average of 187 inches/475 cm of rain per year. Dress in layers for the Summit section. Temperatures can dip below freezing. So prepare for the family vacation beforehand so you won’t get stuck in the cold.

Unlike Haleakala, Hawaii Volcanoes National Park offers live volcanoes, these are the volcanoes of Hawaii people go to for their Hawaii vacation or Hawaii family vacation. Two of them. Very active ones. They are part of the famed Ring of Fire – a series of volcanoes, many of them underwater, that lie along the edge of several continents. The park covers nearly 1350 km²/505 mi² and has several distinct ecosystems.

Located on the Big Island, it is about an hour drive southwest from Hilo. Once there, visitors can enjoy areas ranging from the lush jungle at sea level to the peak sporting the world’s largest volcano, Mauna Loa (13,677 feet). This World Heritage Site also holds Kilauea, a geological feature in the running for the world’s most active volcano. This volcano should be on your list of Hawaii sightseeing activities to get a view on the world’s most active volcano.

Hiking is a favorite activity along any of thousands of trails here that wind through trees, along ridges of lava deposits and across the black sand beaches of Kalapana. Many enjoy the 350-year old Thurston Lava Tube along one trail. Or, there’s the 4-mile hike along Kilauea Iki trail that descends 400 feet through rainforest into a steaming crater.

Campsites are often booked months in advance, so reserve early.

The park also offers the Hawaiian Volcano Observatory, the Jagger Museum and many other facilities dedicated to exploring these fascinating geological formations for more Hawaii sightseeing. There’s even the Volcano House Hotel for those who want to stay in comfort while they explore the park.

There are several scenic drives, as well. Crater Rim Drive is an 11-mile auto route that circles the Kilauea caldera and crater. It passes through many diverse environments ranging from rainforest to desert. Chain of Craters Road offers a 40-mile roundtrip drive that descends 3,700 ft/1130 m from the coast to its dead end at a live lava flow.

Visit either of Hawaii’s National Parks when Hawaii sightseeing and see sights that are simply unavailable anywhere else in the world. Make this part of your family’s vacation.

Why Go On A Myrtle Beach Family Vacation?

Fun Things for you to Do on Maui...