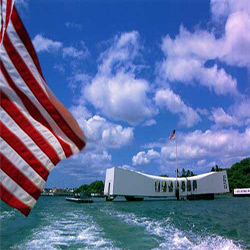 Hawaii Historical Sites can be a Learning Opportunity for the Kids

The Hawaii historical sites like the USS Arizona and USS Missouri memorials are the top places to visit.

On Dec 7, 1941 planes from Imperial Japan torpedo-bombed U.S. Navy ships at Pearl Harbor, Hawaii. During the attack over a thousand sailors lost their lives on the USS Arizona alone, which sank under the barrage.

After the end of WWII efforts began to build an appropriate memorial to the battleship Arizona and her lost crew. Those efforts finally bore fruit in 1962 with the USS Arizona Memorial.

A 184 ft/56m long, covered bridge-like structure bowed in the middle, it houses a museum that can hold over 200 visitors as well as a shrine to the departed. The structure spans the length of the sunken ship, parts of which can be seen underneath the water, along with oil which continues to seep out of the wreckage over 65 years later.

At the entrance sits one of the nearly 20,000 lb (9,000 kg) anchors, one of two that were originally installed on the Arizona. The other is at the State Capitol in Phoenix, AZ.

Through the portal lies the assembly room. Here, visitors can view photos of the period near any of the 21 windows representing a 21-gun salute to the fallen. Seven are kept open to memorialize the date of the attack. There is also a short documentary film discussing the events. As part of your Hawaii family vacation, you will learn more about the details of the World War II.

At the back is a large marble wall engraved with the names of all those who died on or near the ship during the event. Some few of their remaining shipmates visit from time to time and remember solemnly that horrific day.

Not far away is the intact USS Missouri, a WWII-era Navy ship that subsequently saw action in Korea, Vietnam and the Gulf War. At the end of WWII, the Missouri was the site of the official surrender and signing ceremony that took place in Tokyo Bay. Here the Emperor and other Japanese representatives met with Gen. Douglas MacArthur, Adm. Chester Nimitz and other officials to sign the terms of surrender documents.

When the time came to retire the ship there was intense competition among several cities to house it as a museum and memorial. Over the objections of some who thought it might diminish the Arizona memorial, it was finally brought to rest in Pearl Harbor in 1999.

Its bow points to the fallen ship as a symbolic gesture of watching over those whose remains still lie in the waters nearby. Unlike the USS Arizona Memorial, tours of the USS Missouri are not sponsored or maintained by the National Parks office. The tours are separate.

Touring the Missouri takes about an hour, perhaps longer as new areas become available as they’re brought up to current safety regulations. Numerous parts of the ship are accessible, even beyond those that are part of the guided tour. Cabins, gun-turrets, engine room and more are shown and explained as you wend your way through the large battleship. Then you’re free to explore as long as you like. This family vacation is an educational, historical way to learn about Hawaii’s history and the history of World War II.

How to Enjoy Waterparks in Canada

Fun Things for you to Do on Maui...