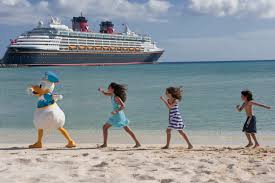 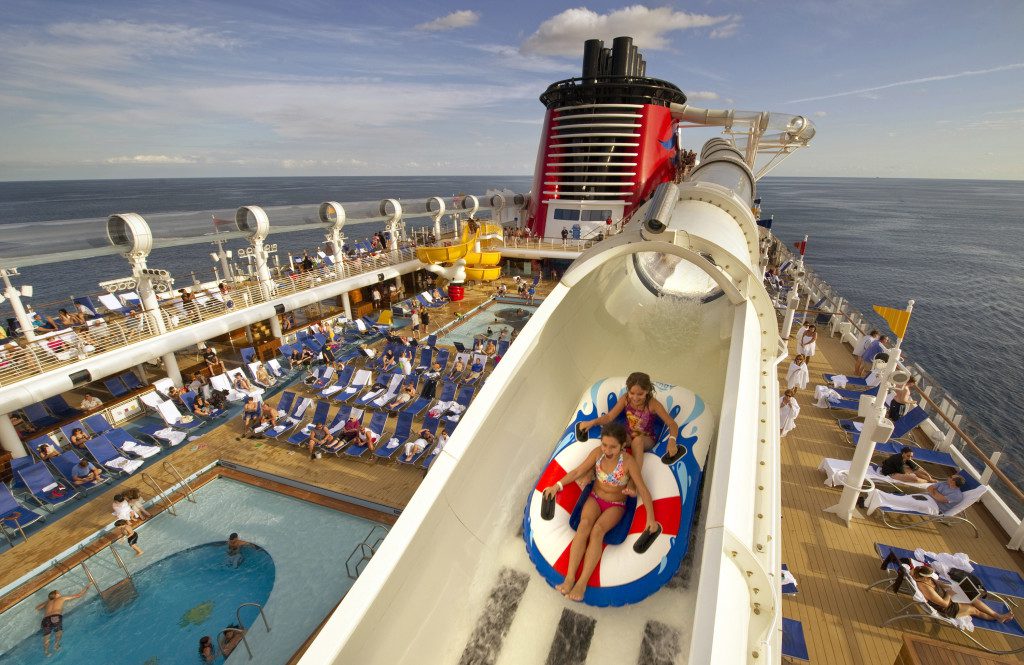 There’s magic in everything that team Disney touches and the Disney cruise line is no exception. Michael Eisner himself commissioned a talented group of ship designers, cruise experts and Disney creators to produce cruise ships that would appeal to adults and children of all ages. The result was two nearly-identical ships, Disney Wonder and Disney Magic.

The ships are distinctively Disney, with the famous mouse silhouette prominently placed on the smokestacks and appearing frequently throughout the ships. That’s not all; a fifteen-foot statue of Goofy is the figurehead on Disney Magic while Donald Duck adorns the front of Disney Wonder.

Of course, cast members masquerade through the ship in costumes of the famous Disney characters. Disney art is featured on the walls and images of Disney characters appear everywhere. Disney excels at promoting everything Disney so expect on-board shops to be full of Disney memorabilia.

The cruise can easily be combined with a stay at Walt Disney World; passengers can stay at Disney World for several days before or after a cruise for one price that includes transportation on, what else, a Disney bus to or from Port Canaveral.

And with the latest technology, tourists check in only once and the key card issued to them unlocks both their hotel and stateroom doors.

As expected, this Cruise Line caters to children with activities for all age groups all day long. In fact, more than 15,000 square feet of ship’s real estate is devoted to children. Teens have a private area of the ship dedicated to their interests that offers video games, movies, and a place to listen to CD’s. Supervised teen sports are also available.

Disney Cruise Lines provides quality night-time entertainment in a 977-seat theatre each evening with, of course, a family orientation. While other cruise lines mimic Las Vegas entertainment, Disney entertainment is similar to shows at Disney World.

As might be expected, there is no casino on board the Disney ships. However, adults can find evening entertainment in a number of lounges and nightclubs.

A special feature of the Disney cruises is the dining arrangement. Dinners are served at 6:30 and 8:30 pm in one of three family dining areas. Over a three day period, a passenger will have dinner in a different restaurant each night, thus getting to experience the unique ambiance of each one.

For a $10 cover charge, those wishing to avoid family dining can opt to eat at the up-scale adult-only restaurant, but only after gaining sought-after advance reservations.

If you or your children adore everything Disney, you will certainly enjoy this cruise.

My family of four just returned from the Disney Wonder in April. My husband and I have cruised once before with Royal Caribbean, but it was the first cruise for my 9 year old daughter and 14 year old son. We are from Florida and we only did the 4 night cruise portion and did not combine it with the Disney World land portion.

The ship is spectacular to see and my kids were really excited once we were checked in on-board. We signed the kids into the Oceaneers Program the first afternoon. We had to fill out a questionnaire, including whether they would be allowed to check themselves in and out, and then we met with one of the counsellors and got our pager.

Our cabin was wonderful; we booked an outside cabin with a veranda. It was a little cramped inside for our family of four, but it was nothing we could not live with. It was nice to have the balcony for great scenic views and fresh air. My husband and I would sit out their at night and watch the ocean after the kids were in bed.

We enjoyed the dining rotation and found the food to be enjoyable. Not the best we have had but definitely decent and no one went hungry. There was enough variety for the kids to choose something they wanted every night including my youngest who is a picky eater. The service was very good in the dining room. We heard some other tables complaining but our staff was excellent.

The shows were all a lot of fun for our whole family, even the kids really got into them. We didn’t do much else in the evenings, we were all pooped!. My 14-year-old enjoyed the teen group at Common Grounds. He did both of the teen-only shore excursions and found friends to hang out with on the ship.

My 9-year-old liked the kids’ program at Oceaneers’ Lab and also found a couple of new friends to lounge with on-board.

I will not go into the shore excursions because there are many you can choose from and comments will vary on what you decide to do. We did enjoy the ones we did although some can be a tad expensive.

We did enjoy Castaway Cay very much. There is tons to do for kids of each age and even a private beach for adults only. We had great weather that day and really enjoyed some R&R on the private island.

My youngest daughter was a little seasick the first few days so we gave her the over the counter medication we had brought with us and she was fine for the rest of the trip.

Overall we really enjoyed it. The kids has a blast and it was nice that there were so many activities for them so we could have some adult time without them also. I would do it again with the kids.