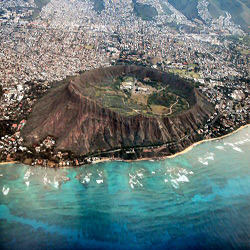 Some of the popular places like Diamond Head State Monument, located in Oahu, is one of Hawaii’s biggest tourist attractions. It isn’t hard to see why. To the geologists it might just be a ‘pyroclastic cinder cone generally comprised of a friable tuff-type soil structure’, whatever that means.

To tourists, Diamond Head is the summit of volcanic excitement.

Named by English sailors in the 19th century who found calcite crystals they mistook for diamonds, it is Hawaii’s most recognizable landmark. Its diameter covers over 3,500 ft/1067 m. At its pinnacle, it is 760 feet/232 m high at Le’ahi Peak.

But those numbers, large as they are, hardly convey the sheer breathtaking sight that greets visitors whether at the base or the top. The volcano saw its last explosive eruption over 500,000 years ago. But the amazement on the faces of those who hike to the top is ever new.

The hike is just under three-quarters of a mile (about a kilometer). No more than a moderate climb, it takes about an hour to reach the top. But during and afterward one has the feeling that this is the experience of a lifetime. For along the switchback trail, which offers a handrail for assistance, the sights are unparalleled.

Climbing up the final 99-step stairs near the top, the feeling grows that you are about to see things you never have before, and never will again. Make your way through the dark tunnel then enter into the light. At the top your effort is rewarded by a panoramic view of Oahu that is unavailable from any other vantage point. This is a great family vacation for you since not only will you be spending time and the wonderful view with your family but you will get a dose of exercise by climbing the stairs.

Take a few moments to enjoy the small things, too. A military bunker that once housed WWII lookouts is still a major attraction. It is at the end of the 225 ft/68 m tunnel. Explore pieces of the old fort built at the turn of the 20th century.

The gentle trade winds brush your hair while you listen to the crashing of the waves down at the shoreline. Look down and see the beautiful Kapiolani Park at the south end of Waikiki. Look across the landscape and gaze on some of Hawaii’s most luxurious private estates. In the center of the island are the Koolau Mountains.

Bring a flashlight to assist you through the tunnel and a bottle of water to assist on the hike. And, oh, don’t forget the camera. Take souvenir shots of your Hawaii family vacation against the backdrop of the tunnel and on the way up to the Diamond Head. Even though there are a lot of popular places in Hawaii nothing beats the Diamond Head as it is an exhausting and fun way to tour. Hiking up the hill to get to the summit is the best way to see the view of the Diamond Head and the view of Hawaii. This has to be one of the most popular places in Hawaii!

Temperatures at the summit can be cool, but the sun is very hot at times, especially given the dark stone all around. Dress accordingly. Diamond Head attracts over 600,000 visitors per year, so come early and be prepared for the crowd. This Hawaii family attraction visit should be planned before hand.

And, by the way, ‘pyroclastic’ just means rock fragmented by fire produced by a volcanic eruption, while tuff turf is rock made of compressed volcanic ash. Come climb this big cinder cone, a hill made of volcanic ash, and see what the geologists – and the tourists – get so excited about. So add Diamond Head to the list of your popular places in Hawaii.

Hawaii Historical Sites can be a Learning Opportunity...

Scuba Diving in Hawaii has Variety

Why Are Timeshares So Bad? Pros and Cons...